Tuck is a school that is well known for its close-knit friendly community. During my interview, the second year student told me that the admissions committee specifically selects for people with terrific people skills who know how to collaborate in a team environment. Given that Tuck is looking for team players, does this mean that they put less of an emphasis on the GMAT? Lets find out.

In the chart below you can see that the slope the GMAT vs GPA scatter-plot is .0057. This means that for admissions purposes, Tuck would view a person with 800 GMAT and 3.00 GPA the same as someone with 700 GMAT and 3.57. 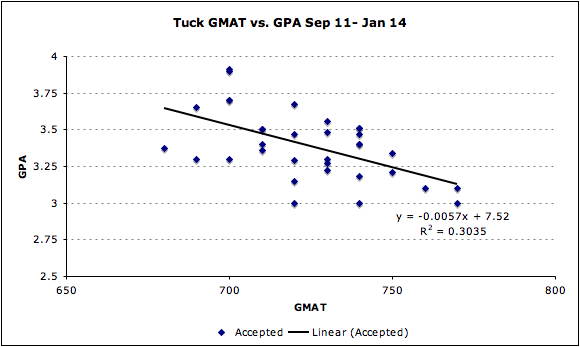 The slope of .0057 is slightly lower than Wharton and Columbia who have slopes of .0061 and .0063 respectively. This supports Tucks claim that they weight interpersonal skills higher than they do test scores.