Admissions consultants often claim that Harvard prefers younger applicants, so I decided to take a look at how age impacts Harvard acceptance rate compared to Wharton. I have heard that Harvard will ding you for waiting too long to apply. I used GMAT Club data for this analysis.

Below is a graph showing the GMAT by age. You can see that for both schools, 25-year-olds score the highest on the GMAT, then the score consistently drops from there.  Both schools have relatively similar scores, but Harvard is higher for the 27 to 29 age range. 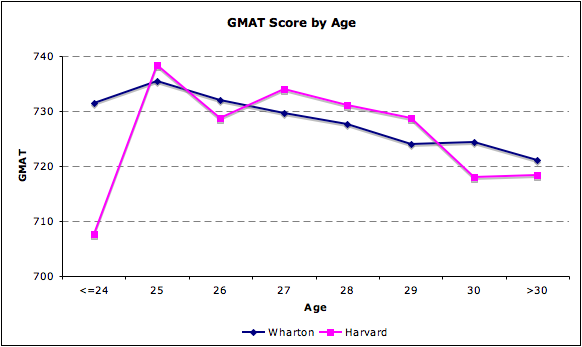 Given just the GMAT information one would think that younger applicants would have the highest acceptance rate. This is not the case because top MBA programs value leadership and work experience so that students add value to the classroom.

I combined some age ranges because the accept/denied data was a little thin after I removed everyone who didn’t include their age. Wharton has a relatively flat acceptance rate, with a dip in the 29 to 30 age range. Harvard on the other hand had a large spike in the 27 to 28 age range, roughly 50% higher than any other age range. It seems that Harvard prefers applicants who are roughly 5 to 6 years out of school significantly more. 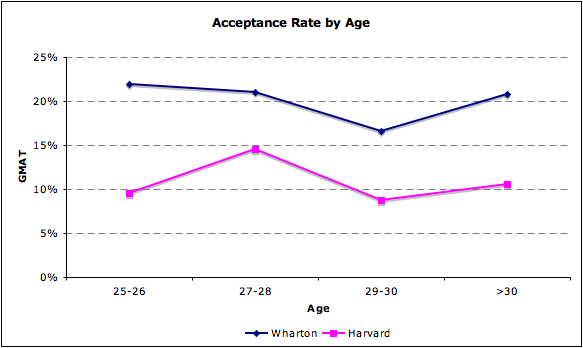 Surprisingly, applicants who are older than 30 did pretty well. I have heard that the older you are the more difficult it is to be accepted. The over 30 group also has the lowest GMAT, so clearly the longer you are out of your undergraduate program, the less schools care about GMAT. I took a quick look at which industries had the lowest and highest application age. It wasn’t surprising to find that consultants generally applied younger, and military veterans and lawyers generally applied when they were older.