An MBA applicant’s GMAT score impacts their acceptance rate at business schools such as Wharton. During the application process, GMAT is one of the few metrics that the applicant has any control over. Undergraduate GPA is already set in stone, work experience can’t be changed and recommendations are written by someone else. The only control a student has is their GMAT, resume and essays, so it isn’t surprising that applicants stress over their score. Today I am going to quantify exactly how much the GMAT impacts you chance of admission into Wharton.

The first piece of information to look at is the distribution of GMAT scores for Wharton applicants. The graph below shows how many students who applied had each score. For the GMAT overall, students who receive a 760 or higher are in the 99th percentile, yet 20% of Wharton applicants have a 760 or higher. I think this data is somewhat skewed by the fact that it comes from the GMAT Club website, where I imagine applicants score higher on average. Surprisingly, the distribution is actually relatively flat between 710 and 760. 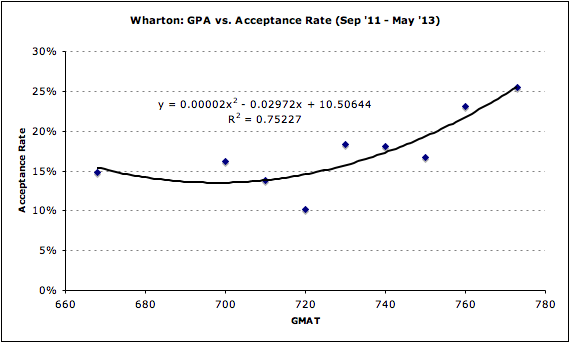 I used a polynomial trend line for the scatter-plot because it had the highest R-squared. The polynomial actually creates a slight curve up at the low end for people with GMAT scores below 700. I don’t think this actually means that your chance of getting into Wharton is higher with a 690 vs. 720. I expect that this phenomenon is due to reporting bias for the GMAT Club data. Someone who gets into Wharton with a low GMAT score is more likely to report it than a person with a high score. I also think that someone with a low GMAT is less likely to even put their GMAT score in their profile because it is highly visible on the website. 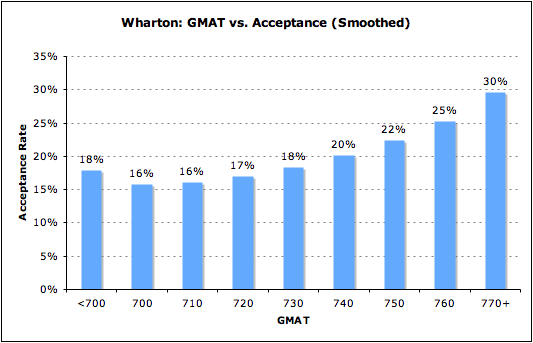 In the graph above, I smoothed out the acceptance rate by GMAT score and adjusted it up. In the GMAT Club data, not everyone updates their profile with the ultimate decision, so the acceptance rate needs to be adjusted up slightly. In the end GMAT score did not affect acceptance as much as I expected. However, probability of admissions is roughly twice as high for applicants with a 770 or higher compared to an applicant with a score of 700.

On a personal note, today I was invited by Wharton to interview for a spot in the class of 2016. I am extremely excited to be interviewed and will be concentrating on preparing for my interview over the next few weeks. 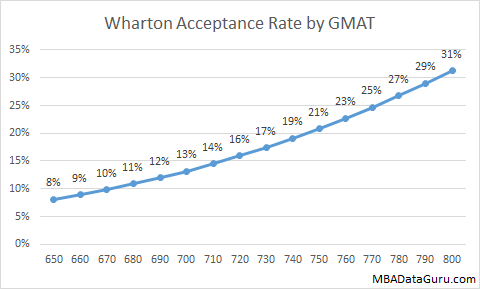 This original analysis did not take into account several additional factors which impact acceptance, such as GPA, years of work experience and the industry the applicant worked in. The graph above is the result of a regression model I built that takes into account all of the other factors. Once GPA, country of origin, work experience are taken into account, the curve below 700 disappears. For more detail, check out the updated analysis of Wharton acceptance rate by GMAT and the disadvantage of applying from India.

5 thoughts on “Acceptance Rate by GMAT for Wharton”