Earlier today I posted the Ross acceptance rate analysis which shows how GPA and GMAT scores affect your chance of admission at University of Michigan’s MBA program. I received a request to see if GMAT and GPA can still predict acceptance rate out of the applicants who were selected to interview. I would never want to disappoint a reader, so here is my Ross interview acceptance rate analysis. While reading this analysis, keep in mind that around 62% of interviewed applicants are accepted, which is higher than schools like Harvard and Wharton but lower than Stern. 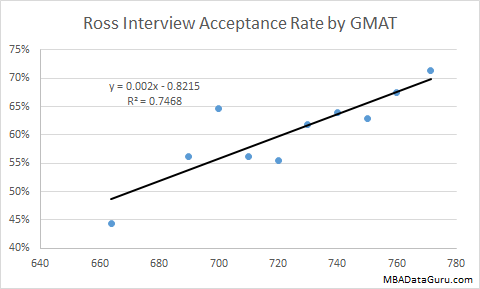 In the graph above you can see that there is a clear relationship between Ross acceptance rate even among the applicants selected to interview. The R-squared is 74% which is fairly high, so GMAT is an accurate predictor of admissions post interview. The slope of the line suggests that for every 10 points higher your GMAT is, you have a 2% higher chance of admissions. Unfortunately for those with a low GMAT score, you are not on an equal playing field even after being selected for an interview at Ross. 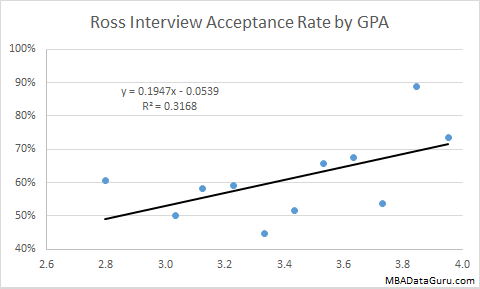 There is also a relationship between Ross interview acceptance rate and GPA, but the correlation is much weaker. Just from looking at the graph you can see that the data is more spread out from the regression line. The R-squared of 32% is much lower than the R-squared for GMAT of 74%. All else equal, it would help your chance of admission if you have a high GPA, but it does not seem to matter as much as GMAT.

When I analyzed Harvard Business School acceptance rate, I found that GMAT and GPA could not predict acceptance rate from the pool of applicants selected to interview. Which means everyone who was interviewed were on a level playing field once invited to interview. That does not seem to be the case for Ross. In the end, even with a low GMAT or GPA, you still have a 50% of being accepted after your interview. All you can do is prepare for your Ross MBA interview as much as possible and hope for the best.