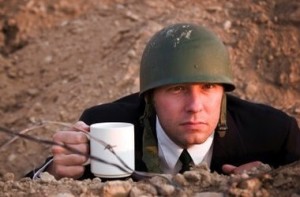 Transitioning from the military to MBA is a fairly popular path to follow. A little over 4% of MBA applications come from military veterans. When looking at the data comparing military applicants to traditional MBA applicants, a few trends become clear:

For the purposes of this article, I define traditional applicants as individuals that have worked in finance, marketing, accounting, retail, STEM and healthcare. They make up around 86% percent of MBA applicants. I excluded applicants that had a background in education, entertainment, sports, hospitality, tourism, human resources, journalism, publishing, government and non-profit.

Military applicants on average have the highest acceptance rate despite having the lowest average scores. My hypothesis is that they tend to have more significant leadership experience than other applicants and tend to do well in job placement. They also know how to operate well under pressure. These traits are desirable for MBA programs.

For the purposes of this analysis, I broke the schools into tiers since not all schools have enough data on military applicants to look at individually.

I looked at the acceptance rates for the other schools but there wasn’t enough data to publish an actual number. So I grouped them into categories.

I plan to do a similar analysis for other non-traditional applicants in the near future.