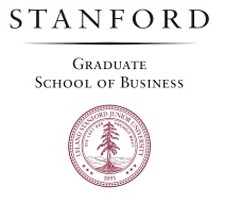 Stanford is tied currently tied with Harvard and Wharton as the #1 MBA program in the world. Stanford’s acceptance rate is extremely low, at 6.8%. With such a low acceptance rate, it is important to understand how at Stanford GMAT and GPA affect your chance of admissions. Every school weighs the importance of GMAT and GPA differently. Today I will look at how Stanford compares the two metrics. For this analysis, I only included applicants who were accepted and are on the margin. We don’t learn much by seeing that Stanford accepted a student with a 3.98 GPA and a 790 GMAT, but we do learn a lot by analyzing the profile of applicants who were just barely accepted. Top MBA schools prefer candidates with high GPA and GMAT, but they are often willing to accept an applicant with low GPA if that applicant has a high GMAT. The same is true for applicants with low GMAT and high GPA. 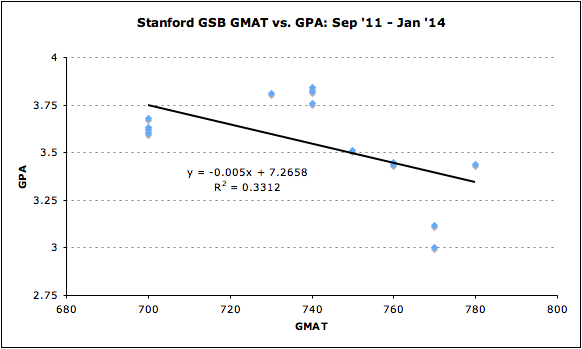 Unfortunately, Stanford data is a little thin because their acceptance rate is so low, but we get a reasonable idea of the GMAT vs. GPA tradeoff. At Stanford GMAT vs. GPA slope is -.005, which means that 100 GMAT points are roughly worth .5 GPA points. So a 680 GMAT with a 3.87 GPA would be viewed roughly similar to a 780 GMAT with a 3.37 GPA. This slope is less steep than most other schools, which means that, compared to other schools, Stanford prefers high GPA over high GMAT. The only school with a lower slope is Stern, which had a -.0043.

Check out how some of the other schools weigh GMAT vs. GPA:

I have published a more recent Stanford business school acceptance rate analysis which has more accurate findings on GMAT and GPA at GBS.

1 thought on “Stanford GMAT vs. GPA: Which is more important?”