MIT is one of the most selective business schools in the top ten after Stanford and Harvard. The MIT MBA acceptance rate is only 13%, however several factors can influence your chance of admission at Sloan. Now that I have finished my consulting interviews and secured some summer internship offers I have been able to turn my focus back to this website. I built a statistic model to predict the chance of admissions based on a few pieces of data. I plan to build an admissions calculator, but until then I’ll share with you some of the insights I learned about MIT MBA acceptance rate. 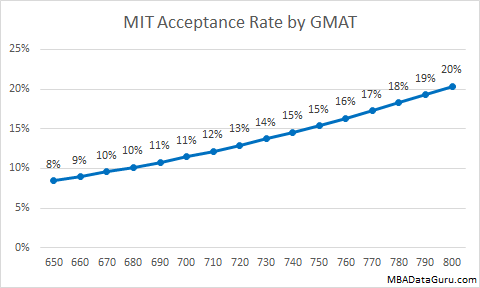 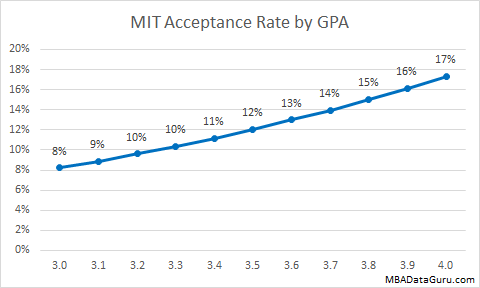 GPA is also critical for admission into the Sloan School of Management. The average GPA is very high at 3.6. For each .10 change in GPA, the acceptance rate changes by roughly 1%. Obviously your GPA is likely already written in stone, so you should focus on increasing your GMAT instead. 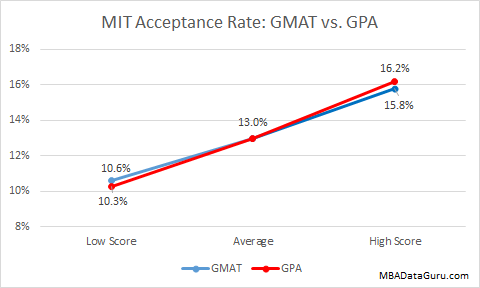 Most schools prefer a high GMAT score* to a high GPA, however MIT is not one of them. The only other school that prefers a high GPA is Harvard Business School. Although GPA matters slightly more than GMAT, GPA can’t be changed once you graduate. If you have a low GPA then make sure you have a solid GMAT and focus on other factors like leadership and volunteer work. I started a networking group that grew to 900 people, which went over well with the admissions committee. It wasn’t even hard, I just started a meetup group in my area.

MIT MBA Acceptance Rate by Round 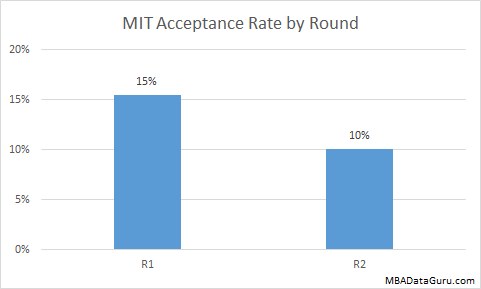 At Sloan, the round you apply in is very important. As you can see in the graph above, acceptance rate at MIT is 50% higher for round 1 applicants compared to round 2. If you have no other choice, you might as well apply round 2, but absolutely try to apply round 1 if possible.

GMAT, GPA and application round were the only factors that had a noticeable affect on admissions rate. Surprisingly, industry, major and years or work experience had no impact on acceptance rate.