Kellogg’s acceptance rate is on the higher side for a top 10 MBA program at over 20%. But don’t be fooled, getting into Kellogg is still very difficult. In addition to high expectations for GMAT and GPA, Kellogg allows all applicants to interview. This allows Kellogg to find candidates with the best interpersonal skills even if they don’t have high scores. Since I don’t have information on candidates’ interpersonal skills, I’ll stick to GMAT and GPA. I built a model that can estimate an applicants chance of admissions to Kellogg based on a few key pieces of data . I am posting the insights I found in the model here until I am able to build the admissions calculator over winter break. 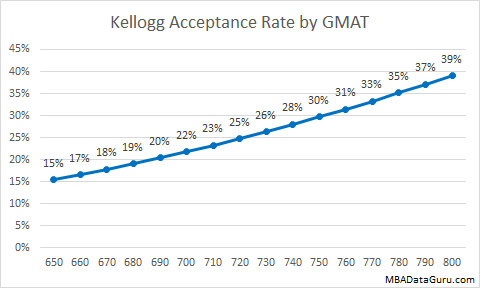 The average GMAT score for Kellogg’s 2 year MBA program is 717, however the average GMAT for applicants is lower, coming in at 709. The graph above shows the relationship between GMAT and Kellogg acceptance rate for the average applicant, who has a GPA of 3.38. You can see there is a strong relationship between GMAT and Kellogg acceptance rate. An applicant to Northwestern has twice the chance of getting in with a 750 compared to a 650. 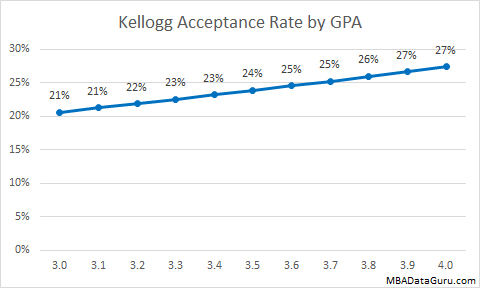 Similar to GMAT, having a higher GPA increases your chance of admission at Kellogg. Even with a low GPA of 3.0, the admission rate is still over 20%. The graph above shows Kellogg acceptance rate by GPA for the average candidate, who has a GMAT of 709 (yes I know that it is not a possible score). 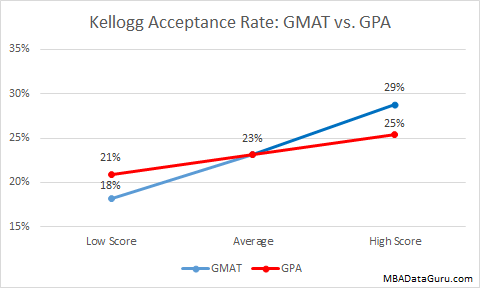 Kellogg Acceptance Rate by Round 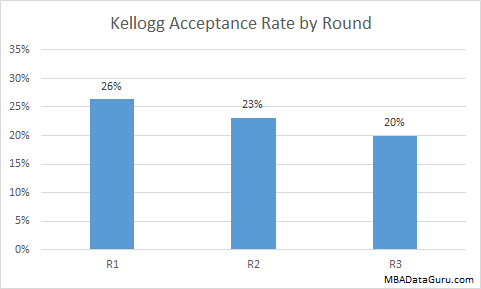 Round 1 applicants had the highest acceptance rate, with round 3 acceptance rate the lowest. These numbers are a little misleading because they don’t take into account difference in the average candidate quality for the different rounds.

The lower acceptance rate for Kellogg applicants in later rounds is explained by lower GMAT and GPA. This is why application round is not a factor in my admission model. Applying in a later round does not appear to harm your chance of admission at Kellogg significantly, especially if you can use that time to raise your GMAT or improve your essay.

The last two factors that had an impact on admission rate were country and industry. Applicants who were living in India had a roughly 6% chance of admission. Candidates who worked in computer software while applying had a 5% chance of admission. Both of these factors were statistically significant, meaning that there was enough data to verify the effect.

Good luck with your applications! Let me know if you have any questions.

*A high score on GMAT or GPA is defined by one standard deviation above average.