I have posted a more up to date Harvard Business School acceptance rate analysis which is based on GPA, GMAT and application round.

Word is that Harvard will take a chance on applicants who have low scores, but impressive accomplishments. Lets see if Harvard lives up to its reputation. 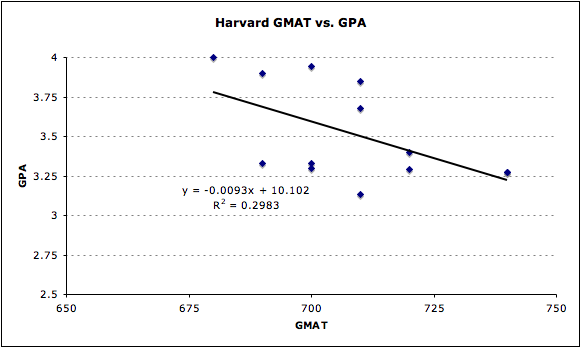 As you can see the slope for Harvard is much steeper than for the other schools. The slope of -.0093 means that Harvard would look at an application with a 750 GMAT and 3.0 GPA similarly to a 650 and 3.93. This result is interesting, it shows that on the margin Harvard is weighs GMAT very strongly, however, the marginal Harvard GMAT scores are lower than other schools. Harvard is willing to take a chance on a low GMAT, but you better have a damn high GPA to make up for it.

Harvard GMAT vs. GPA All Accepts

It is interesting to look at the total accepts instead of just the accepts on the margin. As you can see below, Harvard seems to be completely missing the population of students with low GPA and really high GMAT. I guess the admissions committee isn’t interested in students who slacked in undergrad and tried to make up for it with GMAT. I find that odd given Harvard’s reputation for grade inflation. They say that the hardest part of Harvard is getting in. 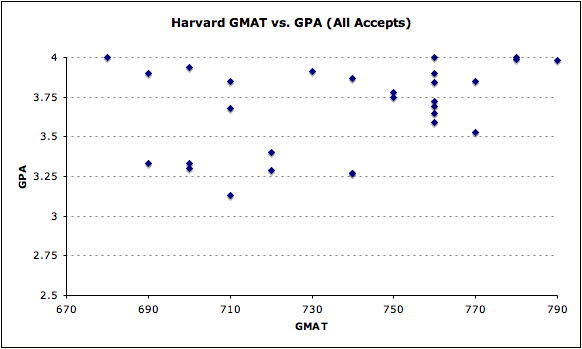 The median Harvard GMAT score is 730. It is interesting that Harvard posts the median GMAT score instead of mean score like other schools. You can hide some very low GMAT scores by only posting a median. I would venture a guess that Wharton’s mean GMAT score, at 725, is higher than Harvard’s GMAT mean. After all, Harvard did accept a person with a 550 GMAT score last year. That has to be bringing down the average.

Check out how some of the other schools weigh GMAT vs. GPA:

Methodology: The scatterplot represents the 50% of applicants who are accepted with the lowest GMAT and GPA. It isn’t helpful to look at the top 50% of applicants because those are not the marginal candidates who barely got in. I occasionally will remove very low outliers because those candidates may have been admitted due to very strong connections that most applicants don’t have. I never remove more than 5% of the total accepted students as outliers. The slope of the scatterplot demonstrates the point at which the school is indifferent to GMAT vs. GPA. The data for this analysis comes from GMAT Club.