Distribution of Number of MBA Applications 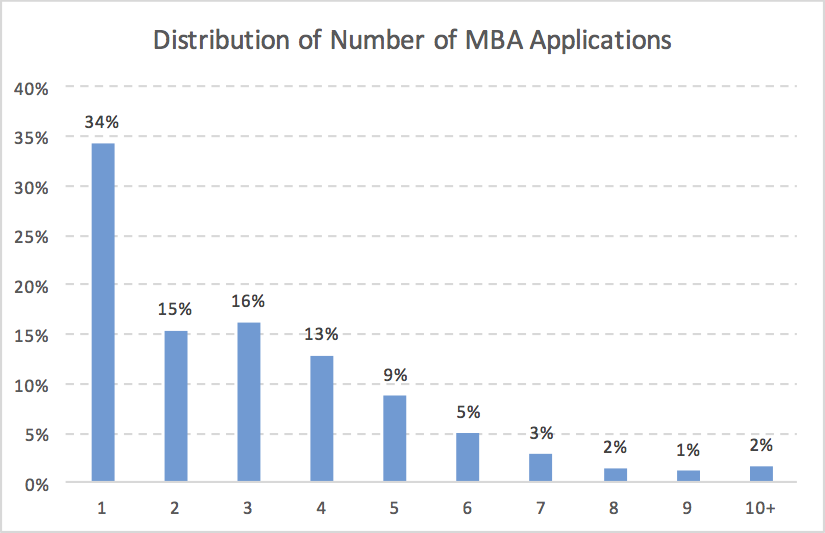 For this analysis, I used MBA application data from GMAT Club forums, which is self reported admissions data. By matching usernames across different school applications, I was able to get the number of MBA applications submitted. It seems strange to see that a third of applicants only applied to one school. I would have expected more applicants to apply to 5 or more schools. Even if we assume the source is slightly biased and ignore those who apply to only one school, two thirds of the remaining applicants still apply to only 4 or fewer schools. 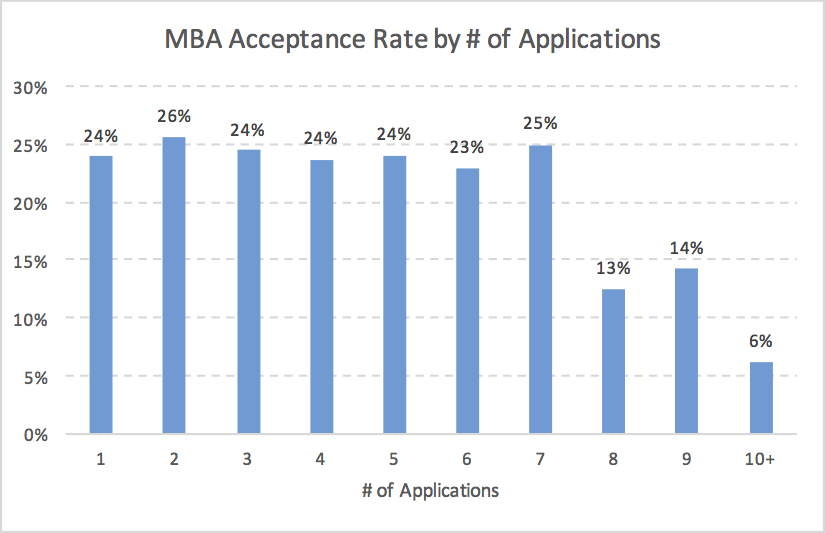 This graph is possibly the most important piece of information for applicants who are considering applying to a lot of schools. It shows that average acceptance rate per application is relatively flat if you apply to seven or fewer MBA programs, at around 24%. However, if you apply to more than seven schools then acceptance rate plummets to lower than 15%. Those few individuals who apply to 10 or more schools only have a meager 6% acceptance rate. Perhaps there are alternative explanation as to why these acceptance rates drop so much, such as GMAT or GPA of the applicants.

GMAT and GPA by Number of MBA Applications 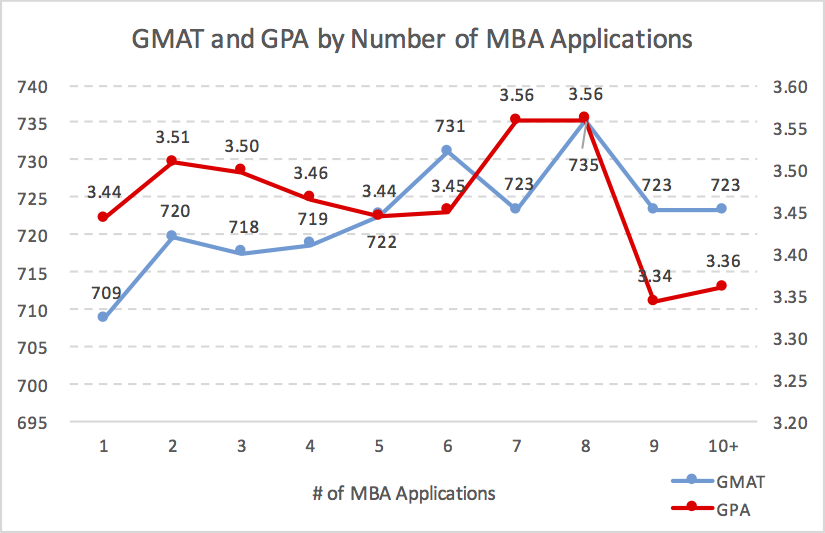 Accepted to at Least One School by MBA Application Number 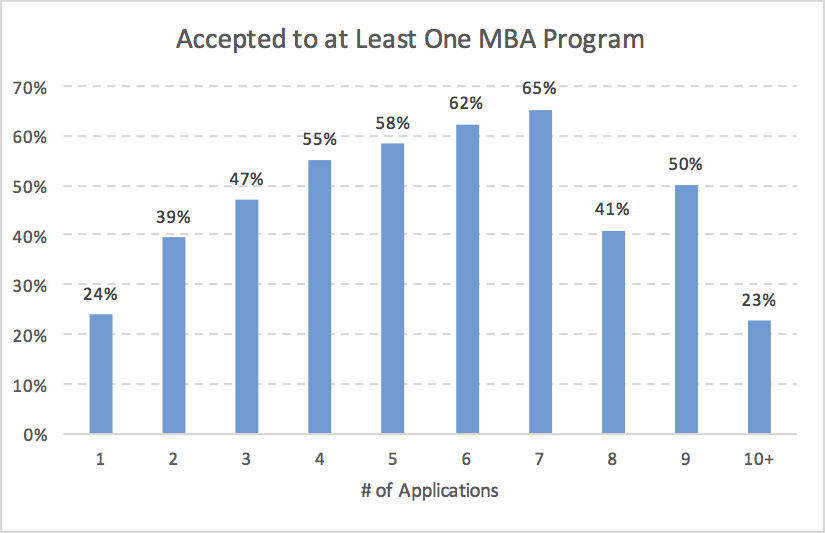 The next question is how likely is an applicant to get into at least on MBA program? If you want at least a 50% chance of being admitted, you should apply to 4 or more schools. The peak is 65% for those applying to 7 schools. If acceptances were completely random with a 25% acceptance rate and 7 applications, we would expect 87% to get into at least one school. This gap suggests that the applicants who are accepted tend to get into many schools while 35% are rejected by everyone. Similarly, for those applying to 5 schools, we expect 75% to get at least one acceptance but only 58% are admitted. I expect that this is because there is a major flaw in their application and they repeat it with every school. This is one of the reasons I suggest applicants use an admission consultant for at least one school. Catch the mistake early with the first school and you will be in much better shape. 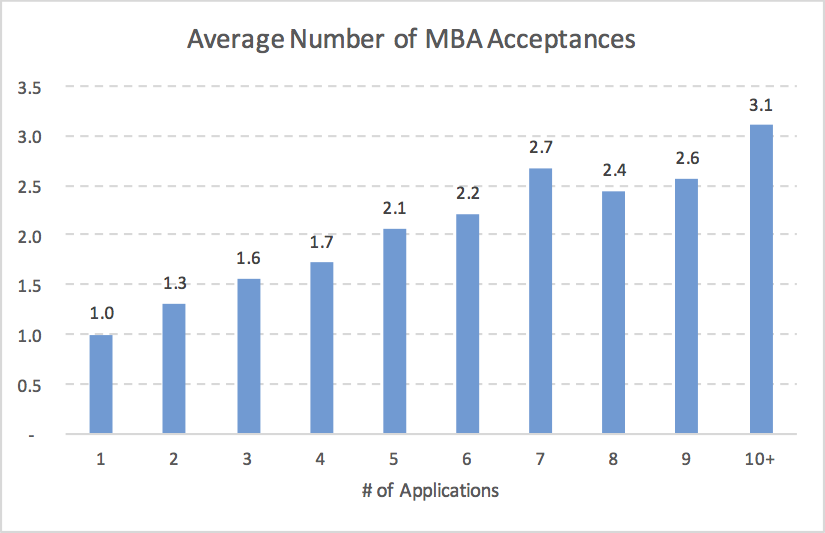 The graph above shows how many schools applicants got into, if they were accepted to at least one school. Unsurprisingly, those who applied to many schools were more likely to have a choice. 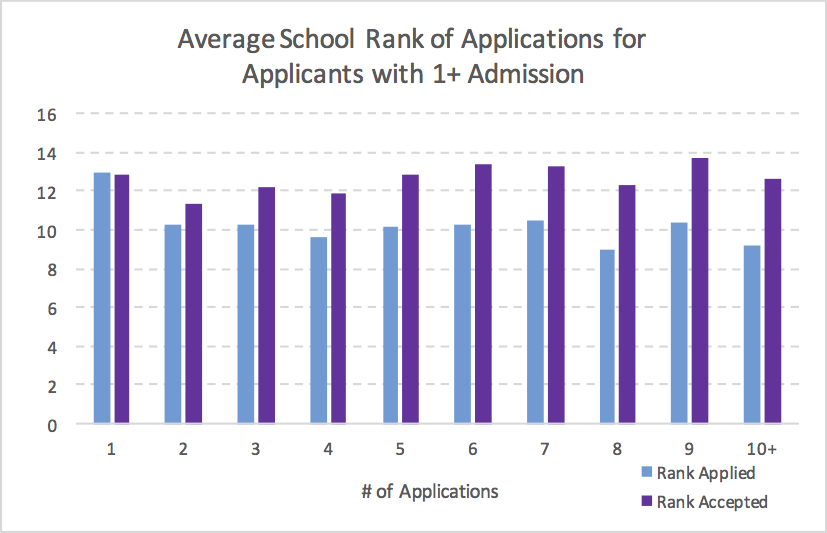 In conclusion, there are many considerations when deciding how many MBA applications to submit. Most of the data suggests that an applicant should apply to 5 to 7 schools to maximize their chance of getting into at least one school. If you want to raise your chance of being accepted to at least one MBA program above the 65% figure for 7 applications, I recommend you hire a consultant to help you craft your essays and avoid major mistakes rather than just submitting more applications.