Recently I discovered an Indian application disadvantage at Wharton’s MBA program while reviewing their admissions data. I have been busy over the past few months at business school and haven’t been able to post. I am attending NYU Stern school of business and loving it. I have a little bit of free time over Thanksgiving break so I decided to make a little progress towards building my MBA admission calculator. I started by analyzing Wharton’s admission data because I have far more data available for Wharton compared to other schools. This makes it easier to find statistical significance in the model. For example, there are 1,093 Wharton applicants verses 498 NYU applicants. I built a beta version of a model to predict admissions into Wharton, but plan to spend a lot more time working on it before I release it on this website.

The Indian Application Disadvantage at Wharton

In building the logistic regression, I found that the only three variables had statistic significance, including GPA, GMAT and whether the applicant was from India. I was shocked to find a significant Indian application disadvantage, the acceptance rate for Indians was 3.4% compared to 18.2% for Americans and 13.8% for non-Indian Internationals. 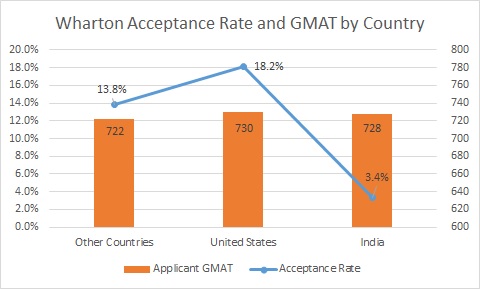 I don’t know why the acceptance rate for Indian applicants is lower despite similar GPAs and GMAT scores. It could be due to trouble writing application essays or some other explanation, but I think this matter needs to be looked at closer.